By Thoughts and Rants in Jogging Pants

Man, I looked down at the date today and it rang out in my mind. I couldn’t figure out why at first, was it somebody’s birthday? Did I have an appointment or something? I eventually remembered the significance of the day. It was my first hip hop concert. 1994. 25 years ago. Good lord! I had that ticket hanging on a bulletin board in my bedroom when I was younger, and that’s probably how I remembered the date. (Or…. the real story if you prefer is that it was the 1 year anniversary of my girlfriend at the time, and I felt shitty for not hanging out with her that night, but……) we were going to see De La Soul and A Tribe Called Quest who to this day are my two favourite hip hop artists. What a show! The latter who I have to choose if asked for a preference, was at the absolute pinnacle of their career, which in my humble opinion coincided with the very peak of hip hop as an art form. This would be like seeing Led Zeppelin in 1971, or James Brown, or Elvis or something like that. Prince or Queen I suppose.

I went with my friend Brad. Which made me think of this picture. This picture is not from that night. I have no pics from that night. There were no camera phones back then. Most dudes didn’t carry cameras around with them. A good chunk of my life is undocumented. From whenever my mom stopped thinking I was cute 😉 (I wink there, because my mom will read this, and better still think I’m cute), to whenever I got it in my mind to buy a camera. Whatever those years were, there aren’t many pics. Maybe some birthdays or something.

This pic is of Brad and I in the summer of 93. About to go on a road trip to Cleveland to watch the Blue Jays (who won the World Series that year btw…. and haven’t won since *sniff*). We were mad skinny, oh my god! Ready to drive a Pontiac Acadian over the border. I must have blogged about this car already, but it didn’t have power steering. If you’re under 40, you don’t even know what that means!!! If you’ve ever been to a theme park or carnival that had a spinning tea-cup ride, or some other equivalent, there’s usually this giant steel wheel in the middle of the cup that you can try to spin around while you’re spinning around to control freak your own turns, and it’s heavy as shit to turn. That’s what driving a car with no power steering is like. 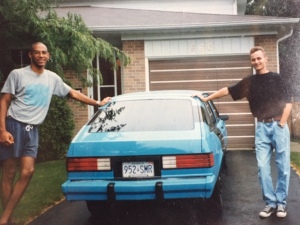 Look at us!!! Young and full of piss and vinegar. Look at my Chuck Taylors… man I gotta get another pair of those. That car embodies the phrase, ‘putting lipstick on a pig’. That car was a piece of shit. It looked cool though, and the system pumped. The rest mattered not. That was summer of 93. In the Fall, A Tribe Called Quest put out their best album ‘Midnight Marauders’ (apologies to Tribe fans who prefer ‘Low End Theory’…. you are not wrong either), and the Toronto Blue Jays would win that last World Series. I was 18 and skinny. Didn’t have any idea what I was doing, but I looked alright doing it. I’m not trying to say that was any better than 2018….. but it didn’t suck. That’s all I wanted to say.

About Thoughts and Rants in Jogging Pants

I'm a music lover, an enthusiast, a diaper changer, an opinion sharer, a chicken wing consumer, a procrastinating couch sitter, an actor, a business professional, a foodie, an above average dresser, and blogger at www.thoughtsandrantsinjoggingpants.com END_OF_DOCUMENT_TOKEN_TO_BE_REPLACED
This entry was posted on Wednesday, March 6th, 2019 at 3:47 am and tagged with 1993, 1994, A Tribe Called Quest, Hip Hop, Humor, Humour, Music and posted in Humor, Stories. You can follow any responses to this entry through the RSS 2.0 feed.
« That Time I Wrote/Directed/Acted In A Short Film Part 2
That Time I Had My Own Cooking Show »